Well, it’s time to sum up another week. The Friday before last we went to see the Grizzly Adams Wolfsburg play against the Hamburg Freezers. As I stated in my last post this was the first time I saw a game of ice hockey live and I really enjoyed it. After scoring the first goal, Wolfsburg was down by two goals after the second third and managed to score another four goals within the last third for a 5:3 win.
Also we went to find two more geocaches and both were pretty easy to find. This time I used a new software for my Android mobile. The c:geo client is able to log in at geocaching.com, to look for nearby caches, hunt them down, log them and much more. If your into geocaching and use an Android powered device, you definitely want to give c:geo a try! It even comes for free!
Last weeks Monday our bunch of „casual n00bs“ started trying the Lich King, who is the final boss of the World of Warcraft expansion „Wrath of the Lich King“. We had like twelve tries and managed to bring him down to 5 percent. Last Wednesday the guild had some more tries but was not able to make any progress without me. 😀 Tonight we had another four tries, got into the third phase from the first try and finally killed the Lich King and earned the title „Kingslayer“. So, once again evil is punished and we are ready to face the next and even more evil evil in the upcoming expansion Cataclysm. *cheer*
On Wednesday the guys from work and me went to fight the biggest escalope you can get in Berlin. To our greatest surprise Micha B., who totally failed last time, literally _inhaled_ that beast. With sweat pouring all over his body he fought hard and he fought quick. The 1.4 kg of meat and coating went to his stomach in absolutely no time. All glory to the new Schnitzelmeister! Every „finisher“ got a cool certificate to hang up at a wall. 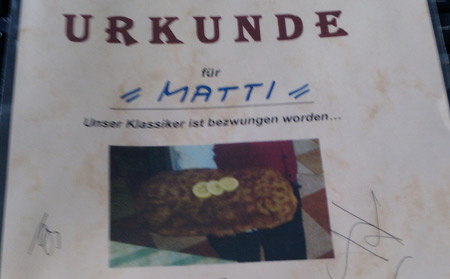 On Friday Micha B., Ronny and I went to see the glorious Chemnitzer FC play against Türkiyemspor Berlin. After scoring 11:0 goals in the last two games Chemnitz was something like a runaway favourite against the bottom club and of course we expected nothing less than another win. Türkiyemspor showed some offensive flaws but played way better than expected, for 30 minutes they even had the better of play, but it was Chemnitz‘ Benny Förster who scored the first goal after 32 minutes and „Paule“ Fröhlich later striked for the 0:2. This was of course not the best game I ever saw, but after all it’s extremely important to win these „easy“ games against smaller teams. Well done CFC, great attitude!
The weekend was a rainy and very, very lazy one. Lot’s of WoW, some reading, some poker, watching football, watching formula one… nothing to report.